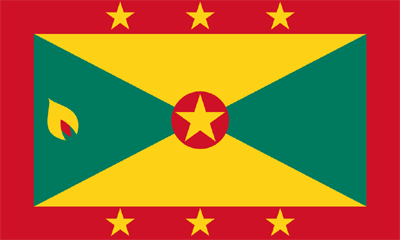 Regarding the immunization strategy, measles vaccination coverage was 83% in 2020, a decrease of 9percentage points over 2000.

In Grenada, the prevalence of overweight and obesity among people aged 15 and older was 51,4% in 2016.

Also in 2016, 57,4% of the population reported insufficient physical activity.

In 2019, the Government of Grenada released its long-term strategic plan (2020–2035), focusing heavily on sustainability and resilience, and placing a healthy population as national outcome number one and at the center of sustainable development. Equitable access to health care is detailed as one part of a wider move to strengthen the social safety net for all citizens, and this represents an adoption of the global move toward universal health coverage. A strengthened community health infrastructure is planned to bolster programs for preventive health, for encouraging healthy lifestyles among children – a response to the increasing burden of childhood obesity – and health programs across the life course. Introduction of a national health insurance scheme to fund specific health outcomes will help prioritize those most at need. Strengthened surveillance and monitoring will provide evidence on health sector priorities and for health communication. The health in all policies framework is planned to ensure that the health and well-being of the Grenadian people remain at the forefront of development in each sector. Therefore, scaling up universal health coverage in Grenada, incorporating national health insurance, and strengthening community-based health care are key priorities to increase the proportion of the population that access care. Strengthening community health services is also a priority for addressing chronic noncommunicable diseases. These strategic actions are also required to ensure prepaid services, provide a wider range of services, and improve the quality of service delivery. The Basic Needs Trust Fund Programme is the flagship poverty reduction program of the Government. The overarching objective of this program is to reduce poverty and vulnerability by enhancing access to basic social and economic infrastructures and human resource development services.

The Grenada population is aging, and the pace of this aging is predicted to increase. In 1980, the proportion of Granada’s population aged 65 and older was 7.2%. This proportion increased to an estimated 9.8% by 2020, and is predicted to more than double to 21.2% by 2060). This future increase of 11.4 percentage points represents a rapid rise in older adults, and remains above the regional averages for the Caribbean of 10.7 percentage points, but below the average for the Americas of 13.7 percentage points. There has been important progress in reducing the burden of neonatal disorders, lower respiratory infections, and HIV/AIDS, all down by one-third since 2000. These successes contribute to a disease burden increasingly dominated by noncommunicable diseases. Cardiovascular diseases, diabetes, and cancers in 2019 were the top three causes of death and disability, collectively accounting for almost half of all healthy life lost. Including all other noncommunicable diseases raises this burden to over 80% of all healthy life lost. Diabetes is a national concern. The burden of diabetes has increased by more than one-third since 2000, is driven by nationally high rates of obesity and physical inactivity, and requires lifelong comprehensive care that is onerous for those living with the condition and for healthcare financing. Solutions to the prevention and control of noncommunicable diseases require multisectoral cooperation.

Grenada experienced three extended COVID-19 outbreak surges between April 2020 and May 2022, with over 200 confirmed deaths by May 2022, concentrated in the first of these outbreaks (September–October 2021). The COVID-19 outbreak hit Grenada hard: although infections were low through the first 12 months of the outbreak, the economic contraction was severe, with GDP dropping by an estimated 12% in 2020 due to the standstill in tourism. The World Bank approved a COVID-19 crisis response program in 2020, aimed at mitigating short-term health, social, and economic impacts, and supporting the Government to build financial resilience during the recovery phase. An ongoing COVID-19 policy is the further scale-up and implementation of the vaccination program in cooperation with international partners.