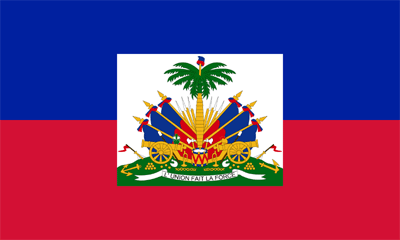 Although great strides have been made over the past two decades in terms of life expectancy at birth, the country's social and health situation continues to present high levels of precariousness, aggravated by the outbreak of the COVID-19 pandemic, political instability, and natural disasters such as earthquakes and droughts in the context of climate change.

Figure 3. Public expenditure on health as a percentage of gross domestic product in the Region of the Americas, 2018

The development of access to connectivity will continue to progress, and while coverage currently reaches only about a third of the population, recent progress has been significant.

In the area of children's health, health indicators should gradually improve. Despite this, the relative burden of mortality from acute diarrheal diseases and acute respiratory infections in children under 5 years of age remains disproportionate. Poor living conditions and malnutrition play a major role, and structural problems of sanitation and drinking water supply will need to be addressed in order to reduce these factors as causes of mortality. Strengthening strategies to optimize immunization coverage of the child population will also have great benefits for children's health. Between 2000 and 2017, infant mortality in Haiti decreased from 80,3 to 59 per 1000 live births, a decrease of 26,5%. The percentage of low-weight births (less than 2500 g) decreased from 9.6% to 9.1% between 2012 and 2013, while exclusive breastfeeding in the child population up to 6 months of age was 23.7% in 2000, and rose to 39.9% in 2017 (latest data available).

Regarding the immunization strategy, measles vaccination coverage was 73% in 2021, a reduction of 7 percentage points over 2000.

The maternal mortality ratio for 2017 was estimated at 480 per 100 000 live births, an increase of 9,8% over the estimated value for 2000. The maternal mortality ratio, at very high levels and with an upward trend, is a dramatic health reality, and the occurrence of preventable deaths should be placed at the highest priority for government management. The importance of accelerating the local production of blood products, necessary for emergency obstetric care, is equally critical.

With regard to communicable diseases, Haiti has one of the highest incidences of tuberculosis in the region, the transmission of which continues to be facilitated by housing conditions and overcrowding. Health services based on primary health care, with a supply of essential medicines available to the population and active community outreach, will play a central role in the fight against tuberculosis and other common problems such as HIV, malaria, and dengue fever.

Zoonotic diseases such as rabies are common in the country. In 2021, 2 cases of human rabies were reported in Haiti. Timely supply of human rabies vaccines in adequate quantity and capacity for early detection and case management need to be improved.

The communicable diseases described above coexist with other chronic health conditions, such as hypertension, obesity, and diabetes, whose upward trends are already representing an additional challenge for a health system with limited resources and high demand for service delivery.

Challenges continue for Haitian healthcare reform. The healthcare system remains fragmented, with considerable dependence on out-of-pocket payment at the point of service as well as external aid that is mostly disease-specific or program-specific, and often short-term. Recruiting and retaining health professionals is a particular concern. Healthcare accessibility for rural communities is a recognized inequity. There is an urgent need to strengthen health literacy and community participation in health, while renewing the regulatory and governance framework of the health sector. The responses to these challenges are contained within the 25-year National Health Policy and the 10-year Master Plan for Health.

The Government of Haiti, through the Ministry of Public Health and Population, developed a National Health Policy in 2012 to guide health care for the next 25 years. From this policy, a 10-year Master Plan for Health (Plan Directeur Santé 2021-2031) details a strategic framework in six broad areas: health system governance, healthcare delivery, human resources for health, health information systems, essential medical technologies, and health financing. The plan embraces the concept of universal healthcare accessibility – an adoption of the global move toward universal health coverage. Specific universal health coverage strategies include a focus on health through the life course with planned expansion of primary healthcare services working within integrated health service delivery networks, expansion of emergency care, a focus on maternal and child health, and a recognition of the role of traditional medicine in community well-being. Early efforts are beginning to integrate prevention and continuous care for noncommunicable diseases and mental health into primary care. Plans for improved health system governance and performance monitoring will strengthen health system quality control.

Haiti has the youngest age profile in the Caribbean, but is aging and the pace of this aging is predicted to increase. In 1980, the proportion of Haiti’s population aged 65 and older was 4.1%. This proportion changed little in the intervening 40 years, nudging up to an estimated 5.2% by 2020, but is predicted to more than double to 12.9% by 2060. This future increase of 7.8 percentage points is well below the regional averages for the Caribbean of 10.7 percentage points and for the Americas of 13.7 percentage points. Cardiovascular disease, cancers, and diabetes in 2019 collectively accounted for one-quarter of all healthy life lost. Neonatal disorders, respiratory infections, diarrheal disease, and HIV/AIDS accounted for another quarter, reflecting Haiti’s continuing double burden of noncommunicable diseases and communicable diseases. Nonetheless, the disease burden is shifting toward noncommunicable disease, with the burden of many communicable diseases now decreasing (notably for malaria, HIV/AIDS, and intestinal infections). Solutions for reducing many of these challenges require multisectoral cooperation.

Response to COVID-19 and natural disasters

The financial crisis of 2009 and the COVID-19 pandemic in 2020–2021 have adversely affected the economic stability across the Small Island Developing States of the Caribbean. The Haitian response to COVID-19 has included strengthening of surveillance capacity, including genomic surveillance of variants, strengthening infection prevention and control measures, risk communication and community engagement, and limiting COVID-19 mortality through improved case management and access to life-saving medicines, oxygen, and medical devices. Major efforts are under way to scale up COVID-19 vaccination in the country to achieve 40% coverage by the end of 2022.

The National Policy for Social Protection and Promotion aims, by 2040, to reduce poverty, inequalities, and economic, social and structural inequities in Haiti. Included in this policy is a focus on health, specifically among older adults and people living with disabilities. This represents direct action on health inequalities, and feeds into the goal for universal health coverage. There is also a particular emphasis on financial protection through the elimination of user fees for essential health services at the point of care.